The Tiger roared as 166 braved the Rutland Challenge

Ignoring the dire weather forecasts of extreme wind, rain, snow, and high tides, 166 boatloads of winter warriors from all over the UK came to Rutland for this year's 2 day 'Challenge' for the John Merricks Tiger Trophy.

Half of the proceeds of the event go to the Trust, established after John's death to support youth sailing. This was also the final regatta of the closely fought GJW Direct Sailjuice Winter series and SailRacer provided their Sail Trackers to monitor the situation, thankfully sponsored by Rule 26.

The largest British lake avoided the high tides and snow and the sun shone all weekend but it could not avoid the strengthening south easterly wind on Saturday. The actual 10 knots was a lot better than forecast and at the briefing from Race Officer David Wilkins, this had increased to 15, gusting 22, as confirmed from his large and well practiced race team monitoring from the racecourse. Three races were scheduled and by the start of the first fast fleet race, the wind had increased to 18, gusting 24, and progressively increased during the course of the race.

The gusts were getting bigger and, depending on the situation, incredibly exciting or almost uncontrollable. The race team decided to finish the race after two laps for the fast and one lap for the slow boats. There were some great examples of boat handling skills in what were very difficult gusty conditions. In the fast fleet the 29er of Connellan/Alloway, Fireballs of Burge/Wagstaff, Batchelor/Clark and Birrell/Brearey and the 505 of Smith/Needham and in the "Slow" fleet, the 420 of Riley/Taylor and a great battle of the Lasers between Wetherell and Simpson – with Wetherell coming out on top followed by the Scorpion of McKee/Massey. These were being pushed all the way by a Flying 15, Solos, Enterprise, 2000 and others.

The comment afterwards from competitors was about the "hairy downwind legs with big gusts hitting hard". This decimated the fleet – with 45 boats finishing from over 100 starters. Then AP over H (racing postponed return to shore) was flown after race 1 and no more racing was possible on Saturday. The safety teams which included the local Army and RAF crews under the experienced direction of Dick Richardson, Rutland's safety coxswain, were very busy rescuing boats who got into trouble.

The caterers were ready for the early retiring fleet with food and Tiger beer supplied as usual by local brewers Everards who also supplied the prizes. Tony Everard, the past President of the company gave John his first 420 'Rutland Challenge'.While competitors retired to the lounge to reflect on their brief but exciting time on the racecourse and watch the rugby, the club was prepared for the Tiger Dinner.

This year, the 'black tie' code was reintroduced and a comprehensive carvery was served. Before Dennis Merricks, John's father thanked everyone for coming; the Commodore was presented with the 'John Merricks Tiger Club' trophy, newly introduced to encourage greater club participation. A total of 78 clubs were represented in the entries, but most by only one boat. When the Tiger started, John was the only RSC member to take part, this year they had the greatest number and it is hoped that other clubs take this Trophy away from them in the future.

Ian Walker had 'flown in' and he presented three Abu Dhabi Ocean Racing caps to Huw Farmer, Oliver Mills and Morgan Plant, first recipients of the John Merricks Sailing Trust starter boats administered through the RYA OnBoard scheme. This 5 year scheme to supply some 70 Toppers, Optimists, Lasers and Bic Techno boards to young sailors at the very beginning of their sailing was introduced following a discussion at last years dinner when Rod Carr was the guest.

This year's Guest of Honour was Chris Draper who won the trophy 19 years ago. He spoke of his recollections of John and his recent experiences as helm of Luna Rossa in last year's America's Cup. He reflected on the death of Bart Simpson as well and concluded that sailors gathered strength from mutual support in adversity and welcomed the newest 10 year olds sitting next to him. He had brought with him, a shiny silver wetsuit made by Prada, which was auctioned along with other significant items to raise even more money for the Trust. The evening concluded with some vigorous dancing to 'Bodgers Mate'. 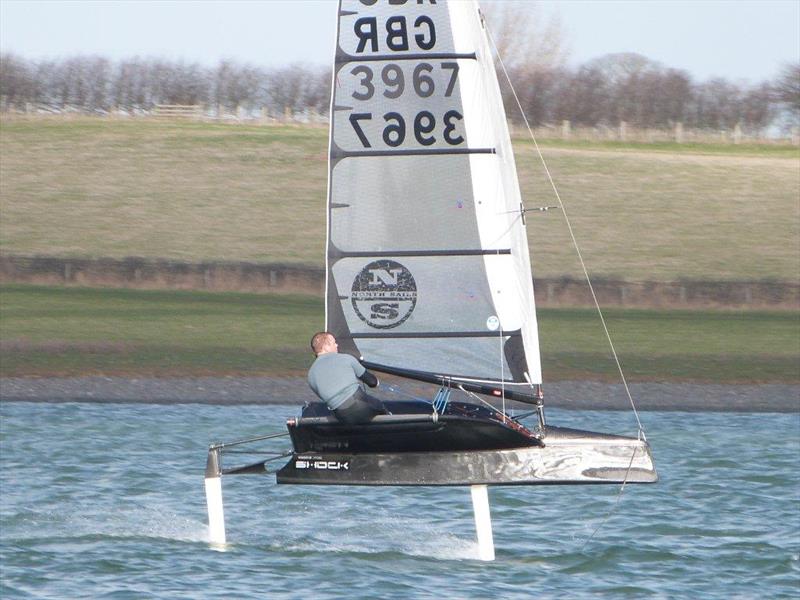 The weather forecast on Sunday was always better than Saturdays and so it proved with perfect sailing conditions for this 2 hour pursuit race in 15 knots of breeze with the odd gust to 20.

SailTracker units were attached to the top 10 of the GJW Direct Sailjuice Winter Series attending as well as representatives of the other classes to give a rough spread of the race online. Trackers were also placed on the marks, lead boat and starter boat. Spectators in the clubhouse could monitor the race on screen as well as being updated by commentary from the lead boat. Visibility from the Club terrace enabled the whole racecourse to be covered.

The race started on time with the Topper of Alex Hughes and William Russell remaining in the lead for nearly half the race before being overtaken firstly by the Miracle of Sam Mettam / Sophie Holden, then the 420 of Tim Riley / James Taylor and the 29er of Ed Connellan / Will Calloway. The 29er pulled past the 420 with about 30 minutes to go and started to pull ahead. Meanwhile, the RS800 of Roger Philips and Will Crocker, 29er of Andrew Kilburn / Hugh Ward and 505 of Andy Smith / Tim Needham and a gaggle of Fireballs led by Dave Wade / Tim Hartley and Musto Skiffs led by Richard Stenhouse were closing in on the slower boats. 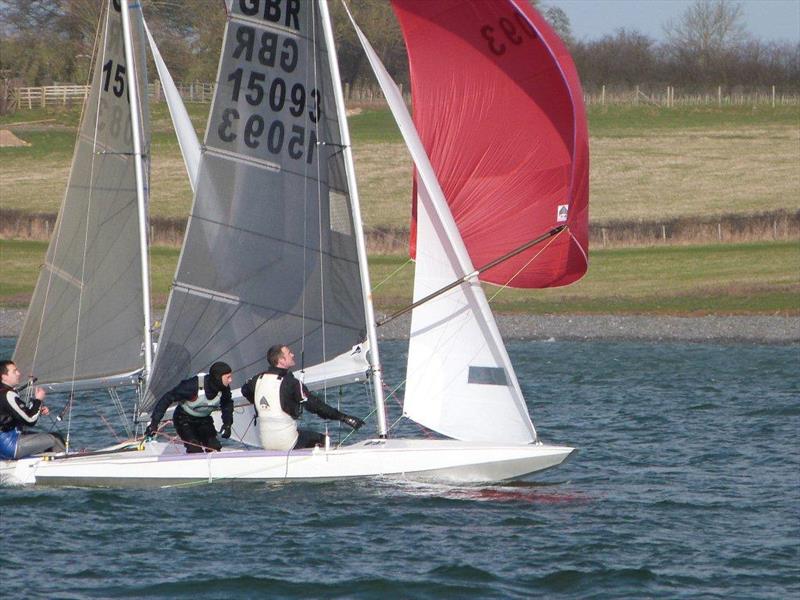 With 45 minutes to go to the end of the race the foiling Moths started and had to "unlap themselves" by 1.5 laps before they even registered on the leader-board. Simon Hiscocks pulled away from Chris Draper and he was literally 'flying' covering a lap in 15 minutes and averaging 22 kts when the average fleet speed was 8.6 kts (data care of SailTracker). Coming towards the end of the race, the Connellan / Alloway 29er had a clear lead but then capsized as they were dropping their kite. At this point, it became a battle between them and the Phillips RS800. At the finish, the 29er won by less than a boat length from the RS800. Andy Smiths 505 had cut through to 3rd place followed very closely by the 29er of Kilburn/Ward and 420 of Riley / Taylor. Wade and Hartley led a strong group of Fireballs and Stenhouse kept his lead on Ben Schooling in the Musto Skiffs.

While the 23 strong race team reconciled the finish at the six possible finish lines, the fleet packed their boats and the trophies and prizes were laid out. Dennis Merricks was on hand to make the presentations and the Tony Everard Trophy (Winner on Saturday) was awarded to Matt Burge and Richard Wagstaff (Fireball-Poole YC). All the other results were dependent on the pursuit so the overall winner of the Tiger Trophy and winner of the John Merricks Pursuit Trophy was Ed Connellan and Will Alloway (29er Rutland SC) sailing for the first time together.

The Junior Trophy (Under 16) was awarded to James Grummett and Daniel Budden (29er Burwain SC) and the Shere Khan Trophy went to Andy Dring and Simon Laken (Laser 2000 Rutland SC). The Lady Tiger Trophy was initially awarded to Lottie Harland (Laser Radial Burghfield / Hayling Island SC), also JMST award winner in 2011, who was one of a small number of girls to finish both races but after further checking, Val Millward (Challenger Rutland SC) was declared the winner.